There are two more weeks left before AFM member and partner organisations gather in Argentina to celebrate the Association's 20th anniversary. The first day of the conference takes place in Buenos Aires with the host being MATba, AFM's founding member. Delegates will travel onto Rosario to enjoy the fantastic hospitality of ROFEX and to conduct the second conference day in the capital city of Sante Fé. We hope to meet as many of our members and partners on this special occassion. For more details please visit: http://www.afmorg.net/conferences/20th-anniversary-conference

MEX Nepal launches Option as a new Derivative instrument for trading, for the ardent traders. Currently available in the Android version, this separate “MEX Option Trader” terminal will cater to the needs of the traders in the option trading spectrum. Initially 3 commodities have been launched Crude oil, Gold and Silver. MEX Nepal Option Trading interface in android device can be searched in play store with “MEXN Option Trader” and is available to trade from 30th January 2017.

According to the report from IME’s International Affairs and PR, during the ceremony of signing 4 MOUs between Tehran and Jakarta held in Iran chamber of commerce, industries, mines and agriculture (ICC) and attended by Hasan Rouhani, President of Iran, and Joko Widodo, President of Iran, Iranian and Indonesia private sectors signed 8 MOUs, one which was between IME and ICDX.

The meeting was attended by Presidents of the Chamber of Commerce of two countries, Megain Widjaja, the CEO of ICDX, Nursalam, CEO of Indonesia Clearing House, Hamed Soltaninejad, CEO of IME, a MoU was signed between IME and ICDX. The MoU was signed in order to create‎ a mechanism for long-term co-operation by developing channels of communication to foster the continuing relationship between the Parties for the benefit of the respective financial services industries in both Iran and Indonesia as well as to assist in the maintenance of orderly financial markets in each country, and accordingly have reached this understanding.

New Products listed on TAIFEX in 2016

AFM is proud to list the Thailand Futures Exchange and the Nepal Mercantile Exchange as new members of the Association.

New Member in AFM Executive Board

Patrick J. Kenny of CQG was elected as a member of AFM's Executive Board on April 18, 2016 replacing Paul Constantinou formerly with Trayport.

AFM organises its 19th Annual Conference on April 18-19 in Istanbul. The event is hosted by Borsa Istanbul. The conference will feature panel discussions on the host country, commodity derivatives (agriculturals and oil/gas), regional cooperation and islamic finance. For more information please visit:

Please join us in Istanbul!

The Swiss Futures & Options Association (SFOA) today announced a change of name to the International Commodities and Derivatives Association (ICDA). The change has been made to support the latest requirements of the Association's members, who include global brokers, bankers, investment fund managers, commodities trading firms, market information providers and service companies, as well as exchanges and clearing houses. From now, ICDA is also accepting individual members for the first time in its long history.

AFM joined the Annual General Meeting of the International Association of Exchanges of the CIS Countries (October 28-29, 2015, Minsk, Belarus) 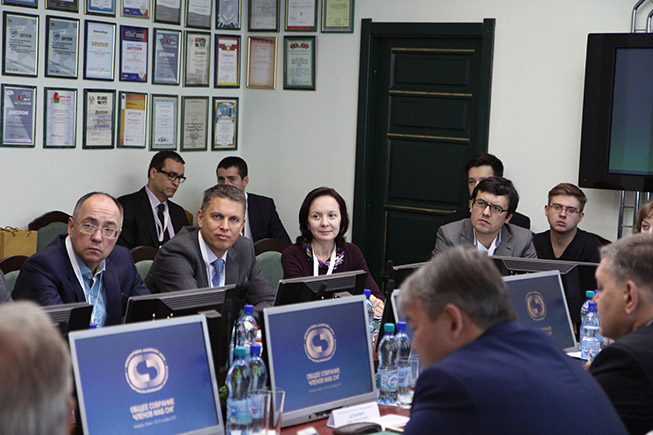 Dalian Commodity Exchange (DCE) and Borsa İstanbul signed a memorandum of understanding (MoU) on October 23 in Istanbul, Turkey, with an aim to seek to cooperate in information sharing, product promotion and staff exchange.

DCE Chairman Li Zhengqiang said that DCE had been attaching high importance to globalization and opening-up. The “One Belt and One Road” strategy of the Chinese Government provides a new opportunity for cooperation among all the relevant exchanges. 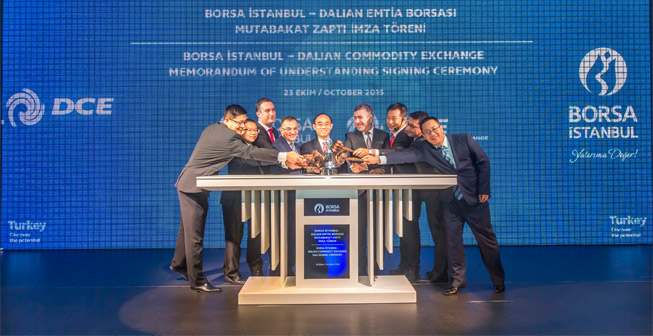 Borsa İstanbul Executive Vice President Çetin Ali Dönmez pointed out the fact that Overnight Repo Rate Futures will allow institutional investors to manage their short term interest rate risks, filling a significant gap in this field, and said, “Overnight Repo Rate Futures are, at the same time, instruments that can be used as benchmark in the floating leg of Turkish Lira denominated interest rate swaps. We offer significant cost advantages for market makers of Overnight Repo Rate Futures contracts which play an important role for the stability of the financial system. We are negotiating with potential market makers in order to ensure the availability of on-screen liquidity as soon as possible”.

Borsa İstanbul Head of Derivatives Market (VIOP) Muammer Çakır said, “FX derivatives at VIOP have become as liquid as index contracts in the last couple of years. By adding another Treasury product in our product portfolio, we are taking a determined step towards creating an efficient and liquid risk management platform for managing all kinds of risks. With this vision, we are pleased to launch Overnight Repo Rate Futures, through which, particularly banks, mutual funds and financial institutions can manage their short term interest rate risks with central counterparty clearing service”.

Borsa İstanbul Derivatives Market (VIOP) is the region’s leading and most liquid derivatives marketplace where the investors and corporates come to manage their risk. VIOP offers the widest range of regional benchmark products across all major asset classes, including futures and options based on equity indices, currencies, interest rates, precious metals, commodities and energy with a central counterparty clearing service.

AFM in the 36th Bürgenstock Conference 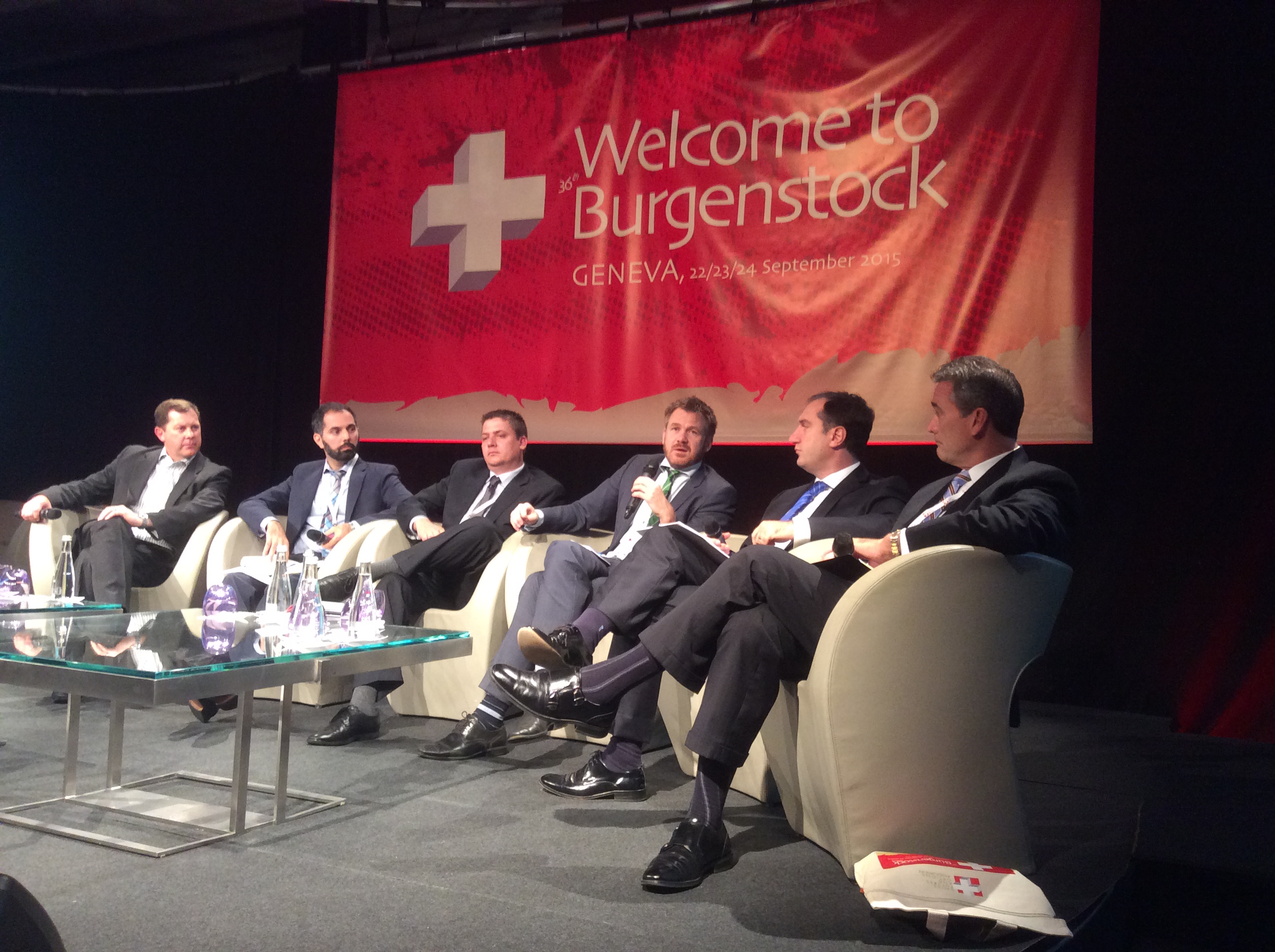 Experience of Structured Trade in Malawi